The Budweiser Clydesdales at The Fairfield County Fair

Linda and I spent a wonderful Wednesday afternoon at the Fairfield County Fair and had a great visit with the Budweiser Clydesdales. 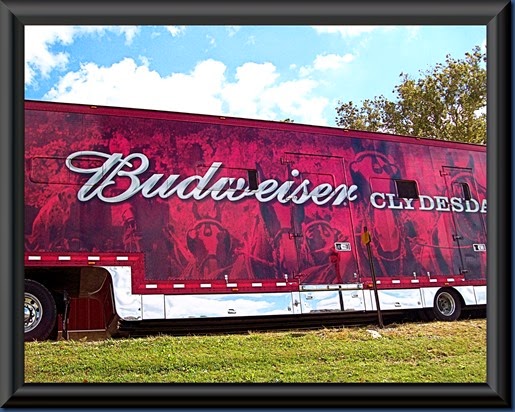 TRANSPORT
”Ten horses, the famous red, white and gold beer wagon and other essential equipment are
transported in three 50-foot tractor-trailers. Cameras in the trailers (with monitors in the cabs)
enable the drivers to keep a watchful eye on their precious cargo during transport. The team stops
each night at local stables so the “gentle giants” can rest. Air-cushion suspension and thick rubber
flooring in the trailers ease the rigors of traveling.” VIDEO: Budweiser Clydesdales: Handling Travel Stress. 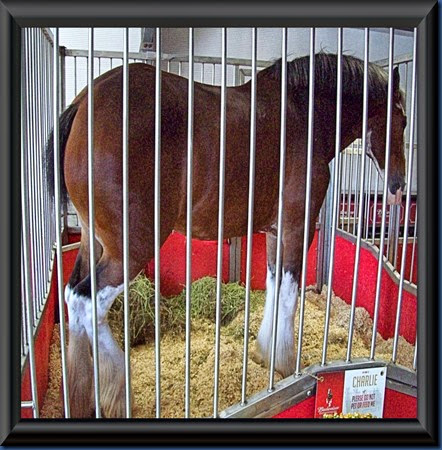 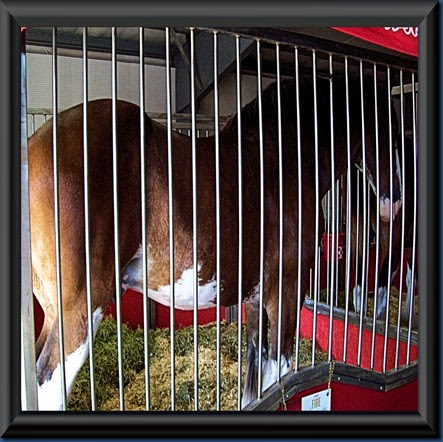 THE CLYDESDALE BREED
”Farmers living in the 19th century along the banks of the River Clyde in Lanarkshire, Scotland,
bred the Great Flemish Horse, the forerunner of the Clydesdale. These first draft horses pulled
loads of more than 1 ton at a walking speed of five miles per hour. Soon their reputation spread
beyond the Scottish borders.
In the mid-1800s, Canadians of Scottish descent brought the first Clydesdales to the United
States where the draft horses resumed their existence on farms. Today, the Clydesdales are used primarily for breeding and show.” 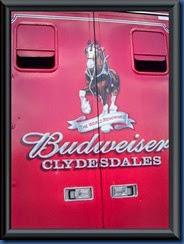 “ THE BUDWEISER CLYDESDALES They were formally introduced to August A. Busch Sr. and Anheuser-Busch on April 7, 1933, to celebrate the repeal of Prohibition. August A. Busch Jr. wanted to commemorate the special day. To his father’s delight, the hitch thundered down Pestalozzi Street carrying the first case of post-Prohibition beer from the St. Louis brewery.” 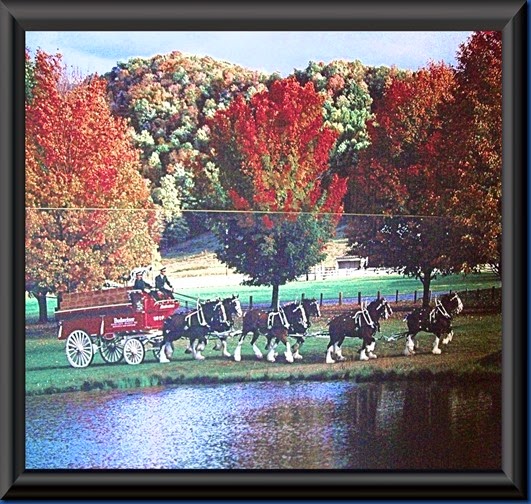 DRIVERS:
“Driving the 12 tons of wagon and horses requires quite a bit of strength and skill. The 40 pounds of
reins the driver holds, plus the tension of the reins, equals 75 pounds. All hitch drivers are put
through a rigorous training period before they are given the reins.”

HARNESS:
”Each harness and collar weighs approximately 130 pounds. The harness is handcrafted from brass
and leather. Pure linen thread is used for the stitching. The harness is made to fit any horse, but the collars come in different sizes and must be individually fitted like a suit of clothes.” 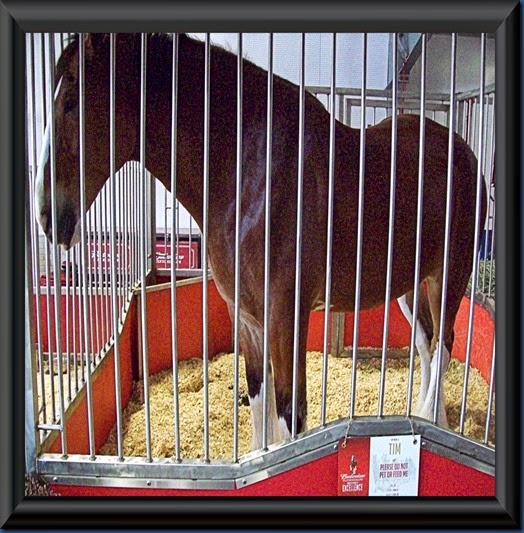 FEED:
”Each hitch horse will consume as much as 20 to 25 quarts of whole grains, minerals and
vitamins, 50 to 60 pounds of hay and 30 gallons of water per day.” 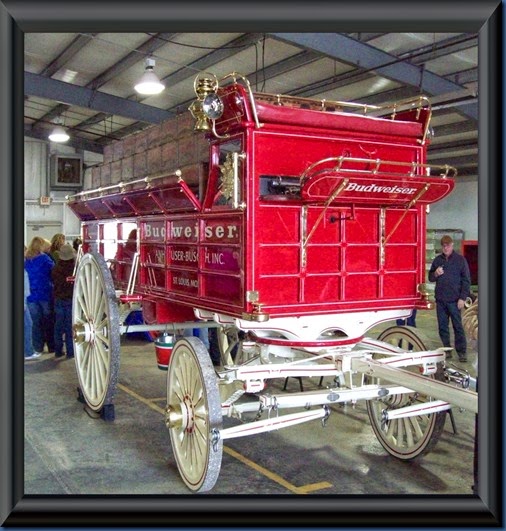 WAGON:
”Turn-of-the-century beer wagons have been meticulously restored and are kept in excellent
repair. The wagons are equipped with two braking systems: a hydraulic pedal device that
slows the vehicle for turns and descents down hills, and a hand brake that locks the rear
wheels when the wagon is at a halt.” "It's quite an accomplishment for Fairfield County," fair manager David Benson said. "They don't appear at many county fairs — it's a lot of state fairs. They do a lot of national (events). READ MORE 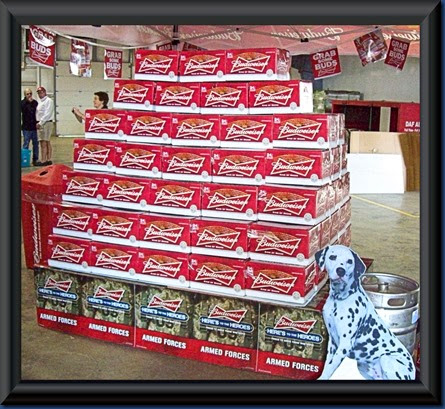 DALMATIANS:
”Dalmatians have traveled with the Clydesdale hitch since the 1950s. The Dalmatian breed
long has been associated with horses and valued for their speed, endurance and dependable
nature. Dalmatians were known as coach dogs, because they ran between the wheels of
coaches or carriages and were companions to the horses. Today, the Dalmatians are perched
atop the wagon, seated next to the driver.” 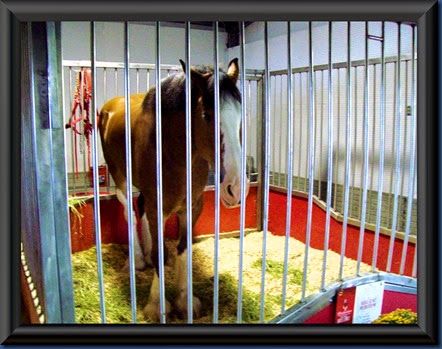 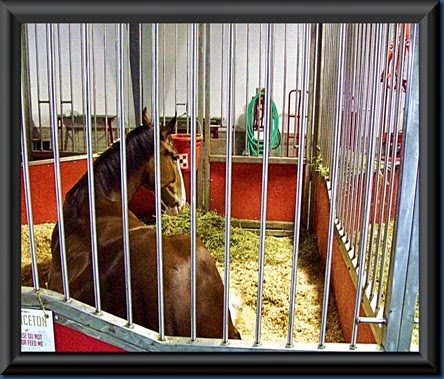 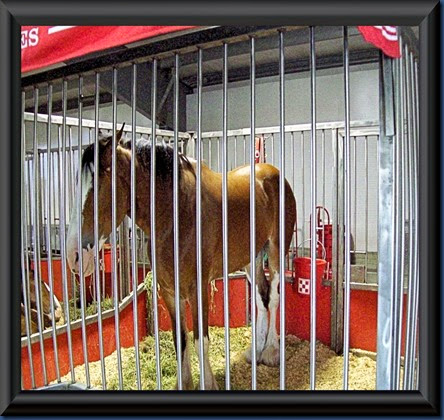 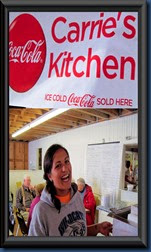 Then it was time for lunch…So::  “Best Double-Cheeseburger” Chef Carrie is one of the last of a dying breed...a short order chef who genuinely cares about her food  Her daughter Rachel (shown in the above photo) is also a good friend of ours.

Linda and I are glad you stopped by and we hope you enjoyed the post. One last thought::: What happened to Lady Godiva's horse when he saw she had no clothes on? It made him shy!

These horses must be really strong. Now I understand why they say work like a horse.

I've seen Clydesdales and they are awesome!

They are such beautifu horses and always seem to enjoy what they're doing (in the videos I've seen -- have never been lucky enough to see in person). You two find so much fun stuff to do -- I love it.

Brave of you to open your blog to voice messaging. I'd be scared to do that. Let us know how it goes.

I just love the Clydesdales! They and Morgans are some of my favorite horses! It's wonderful that Anheiser Busch raises them, cares for them, and celebrates them!

They are beautiful horses, aren't they? We went to the fair last month, but they protected the horses from we strangers!

Oh my goodness! an amazing article dude. Thank you However I am experiencing issue with ur rss . Don?t know why Unable to subscribe to it. Is there anyone getting identical rss problem? Anyone who knows kindly respond. Thnkx
best selling baby monitors