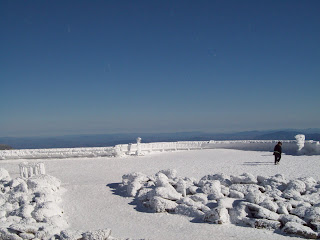 Mt. Washington Blog
Brian Clark [Bio] [Email Me]
RSS Feed
Friday, January 02, 2009 9:04 PM
One Extreme New Years Day
I know that I said that I would for my next entry I would write about the exciting weather that occurred during December, but the weather on New Year's day yesterday was so interesting here on the summit that I feel the need to write about that today instead.
The storm responsible for bringing that interesting weather yesterday was also responsible for dropping 6+ inches of snow in the Boston area on New Year's Eve. Unfortunately, most of the snow stayed off to our south with only 1.3 inches being measured that day up here on the summit. The real extreme weather came as the that storm departed off to the northeast of New England, strengthening as it did so. At the same time, high pressure was pushing into the region from the west. This set up the strong pressure gradient that produces windy days like we had yesterday.
Well, perhaps windy is an understatement. For 21 hours yesterday, a wind gust of at least 100 mph was recorded with the peak for the day being 132 mph. Perhaps even more impressive was the fact that for 9 hours, the average wind speed for those hours exceeded 100 mph with a peak hourly average wind speed for the day of 111 mph. Remember, that is not a wind gust, that is an average wind speed for an entire hour. The average wind speed for the entire day was 92.3 mph. That average would have probably been 100 mph if winds hadn't diminished to around 70 mph for the last 3 hours of the day. Also impressive was the overall gustiness of the wind, or the difference between peaks and lulls. For most of the day, winds would lull to around 40-60 mph and then gust over 120 mph in mere seconds.
It was also darn cold yesterday, although not record breaking. We reached a low for the day of 27 below zero sometime between 7 a.m. and 1 p.m. Temperatures for a good portion of the day remained near 20 below, making for wind chills of 60-80 below zero. Because of this, nobody from the staff went outside yesterday with any skin exposed. In those kind of wind chills, exposed skin will freeze and become frostbitten in a minute or two. We also did not venture very far from the building, even to do our hourly observations. Being fully exposed to winds that are that high and especially that gusty will very quickly take you off of your feet and slide you to the other side of the deck. Once that has happened, pretty much your only option is to crawl back to the door. Even though that sounds simple, in conditions like that it can take 5-10 minutes or even more. Additionally, all it takes is one small mishap, such as losing a glove or your goggles, and you're in big trouble.
Out of the 2 years of non-consecutive time I have spent working on this mountain, yesterday was quite possibly the overall most extreme day I have experienced. It was not quite the highest wind gust however. That was 137 mph back in February of 2006. I don't recall the winds with that storm being quite so gusty, however the temperatures were even colder.
Another big wind event is on the way for tomorrow night into Sunday. I don't think this event will be quite as intense, however we will see winds gusting well over 100 mph again. Check back on Sunday for updates on that storm. I am hoping tomorrow to write about the impressive weather that happened during the month of December. Categories: Recent Weather
Posted at Friday, January 02, 2009 9:04 PM Permalink Comments (0) Post A Comment
Share this:
Wednesday, December 31, 2008 5:36 PM
Posted by Joe Todd at 9:47 AM 3 comments: