A MYSTERY IN THE HOCKING HILLS

I was hiking in the woods the other day ( one of my favorite spots) and of course I didn't stay on the trail. I found something in the woods that just shouldn't be there. All I will say right now is; what I found leads somewhere and has a purpose. Is it on the up and up or is there something sinister out there in the woods? Hopefully I will be able to blog about it later. Thanks, Joe Todd  Morning 11/17/09.

Well I’m back several hours later and didn’t solve the mystery. I’ll show you some of what I found then I hope you let me know what you think.

PARK LAND IN THE HOCKING HILLS. 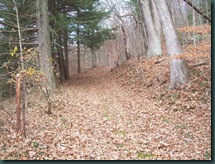 On the trail to the mystery area and this is what I found way off the trail. 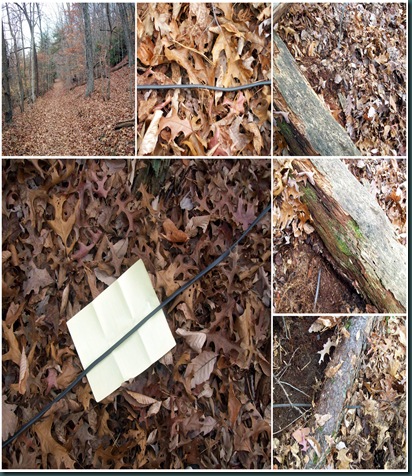 An electric line mostly under the leaves or underground. See how it is buried under the old fallen log so has been there for awhile. Next I’ll show you a collage showing what the area looks like north,south,east,and west. 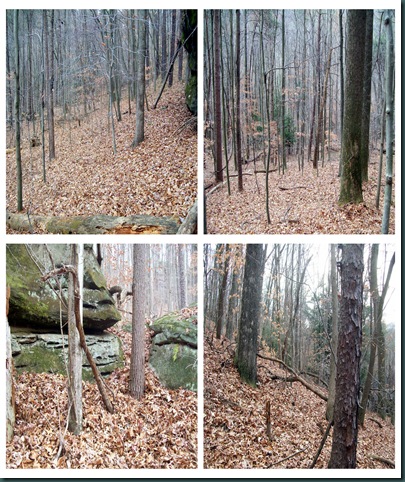 I followed the wire/cable whatever you want to call it for about 100 feet which wasn’t the easiest thing to do (mostly buried or under leaves and logs) So I don’t know where it comes from nor where it goes or why. I stopped following the cable and just hiked the area hoping to find something and I did. 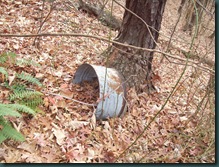 Not much help. I was starting to get a little paranoid.Walking through all those leaves making a lot of noise. So I headed back to the main trail and just sat in the leaves waiting and watching. 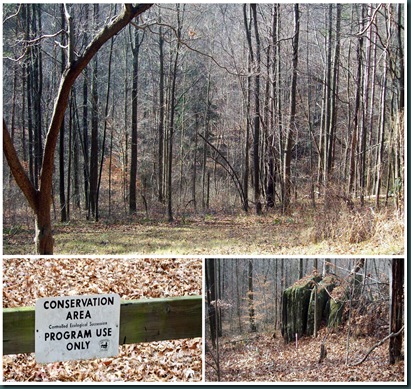 I was sitting at the base of the rock lower right picture looking down into the conservation area top photo. Three white tail deer passed behind me (sorry couldn’t get a photo). Then I heard a dog barking off in the distance in the general area where I had been. About a half hour later two men are walking out of the ravine at bottom of hill (top photo ). They must have  been in the woods before I was. Where did they come from and where did they go. There were no other cars in the parking area at the trailhead. Also,there was no dog with them. 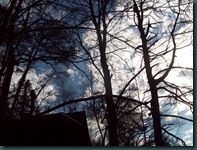 Well if I could just be where the clouds are looking down I would have a different perspective. Ah yes Google Earth. Well there is a cleared area in the middle of a large forested area near where I was but

I guess if I hiked in I wouldn’t be breaking any rules. But::: 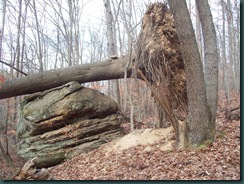 On balance I’m not sure what to do. What do you think?

Thanks for stopping by Joe Todd

OR---maybe there's a moonshine still back in dem dar woods....

Check it out and let us know. I don't want to be disappointed though.....
Betsy

Joe, if it is park land call the park rangers and tell them you found an electric wire running through the woods and where. Ask them what they think. They may check it or have the Deputy. Someone maybe growing something or it may be nothing.The parks area is so big and they are short handed to check everything but they may have time now that the tourist season is down.

All very mysterious and your photography catches the mood beautifully.

This is an eerie sort of story. Would I go farther in? Not on your life. I'd call somebody to inquire!

Great mystery and your photos caught the whole thing. I agree with you other comments. Give the park a call. BTW, love the music on the site while I was reading. Never heard the song before but found myself sining along by the end. Thanks Joe!

Now that's a worthy adventure! I'm a reckless kind of gal and would go for it. It is hunting season so wear orange! My first thought was someone was stealing cable but you said this was public land. Let us know if you solve the mystery.

I think I'd find a park official and talk to them. I sometimes find out very interesting things from people like that. If they don't want to tell you or they become evasive, you know they're doing alien experiments there. ;)