THANKS MR. MICKELSON I LIKE YOUR SMILE ( FOR SPIRITUAL SUNDAY )

WELL, I’VE TAKEN SOME TIME AWAY FROM THE COMPUTER WORKING IN THE GARDEN,GOLFING,HIKING,GOLFING,YES YOU GET THE PICTURE. THIS PAST WEEK MY SISTER SARA SENT ME THIS EMAIL CONCERNING  Phil Mickelson AND I THOUGHT I COULD SHARE FOR A SPIRITUAL SUNDAYS BLOG POST. I HAVE NO IDEA WHO TO CREDIT FOR THE STORY BUT THE CROPPED PHOTO OF PHIL CAME FROM WIKIMEDIA COMMONS. THE REST OF THE PHOTOS I TOOK ON THE WAY TO THE GOLF COURSE THIS MORNING 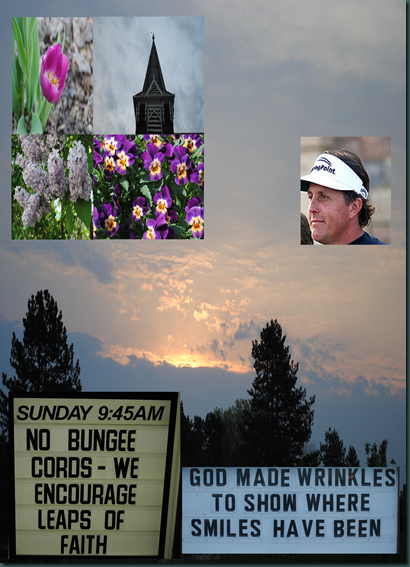 For the past few days, while I tried to enjoy one of the greatest golf tournaments in the world, all I was entertained with was the Tiger Woods show. As soon as one golfer would hit a tee shot or make a putt, it seemed that the next view would be that of Tiger Woods. Tiger Woods just missing a putt that would have put him in contention with the other golfers. Tiger Woods hooking his drive which showed how his time off had hurt his game. Tiger Woods trying to “respect” the game. How it seemed that the Tiger was able to put his past transgressions behind him and was able to concentrate on the job at hand. It just kept going on and on about Tiger this and Tiger that.On the other hand, a little miracle was occurring at the Masters; one golfer just kept smiling. He smiled if he made a good drive, or if he made a bad drive. He smiled if he made a 50 foot putt or missed a 5 foot putt. As he walked between holes, he smiled and shook hands with the crowd. He never cursed a bad stoke or blamed another person for a miss. All he did was smile. Why would Phil Mickelson be smiling? Here was a man whose wife has breast cancer. Here was a man whose mother has breast cancer. Here is a man who rather than allow his wife and mother to fight this battle by themselves, took time off from the PGA tour to be with them. Here was a man that returned to the game he loved when his wife ordered him to. Here was a man, who was so glad for the miracle that was happening as his wife moved closer to a cure, that he rewarded her oncologist by allowing him to be his guest caddy at last week’s golf tournament. This move, which could have cost Mickelson thousands of dollars in purse money, was his gift to a man he knew he could never thank enough for what he had given to him. During the last round today, Phil’s wife was staying in their hotel room since she was still weak from the chemo treatments she is receiving. Phil did not know as he walked up to the 18th tee that his wife would be there. All Phil did was smile. He smiled to the crowds,he smiled to the TV audience, he smiled to God. After his last putt found the bottom of the hole, he hugged his caddy and others and walked to the scorer’s shack. He then gave the biggest smile of the whole four days. He saw his wife, and even in the midst of thousands of people, it seemed that only two were there. Tomorrow I am going to smile. I am going to smile if it is nice weather or bad. I am going to smile at the driver who honks his horn at me, or the driver who cuts me off. I am going to smile if I get the order or not. And when the day is done, I am going to save my biggest smile for the person who makes me complete. Then I am going to look to the heavens and give thanks for being able to smile. Thanks Phil!  God bless you and your family. And keep on smiling! 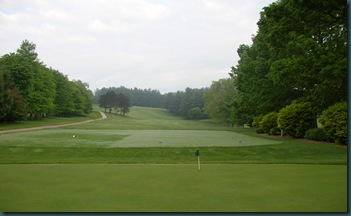 I am going to save my biggest smile for the person who makes me complete. 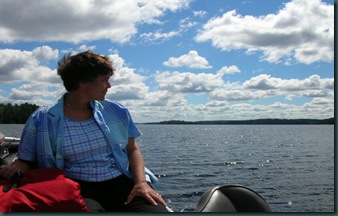 LINDA AND I BOTH SAY, “THANKS FOR STOPPING BY.”

That's an inspirational story if I ever heard one. Very nice post for spiritual Sunday.

Thank you for inviting us into your page. The photos are beautiful.
My husband is an ardent golfer also..American, but now living in Australia for me. He is an ex-Vietnam Veteran and recently went on a golfing trip with other veterans over there.He was very impressed with their courses.
Kangaroo's roam some here.
God Bless you both.

I am a fan of Phil Mickelson and his lovely wife! Thanks for this lovely post! It made me smile! :)

Nice. Have a gentle weekend.

What a beautiful tribute. Phil Mickelson is such a good role model. I was happy when he won. I love the attitude that he has inspired in you. Blessings, and I hope you do well whenever you play golf. Thank you for sharing this inspiring post with us.
Blessings,
Charlotte

I am not a huge sports fan (unless, of course, one of my grandchildren is playing on a team - then I'm quite an ardent sports fan ;)). I am, however, a huge fan of any and all sports players who exemplify the love of Jesus in their day to day lives. I had heard about this wonderful example of Phil Mickelson before from another blog and from my senior mom, but this went into much more detail. Thank you so much for sharing this uplifting and inspirational example with all of us! I shall definitely be watching for more stories about him! :)

I like Phil's style. I think he has grace.
Blessings,
Ginger

I 'followed' the trail you left from commenting on my site and I enjoyed my journey down your page. I especially loved this post, as I am a huge Mickelson fan and posted a 'congrats' on my blog as well. But this...this was just beautiful! Now, HE is a class-act role model. I can only imagine how thrilled he was to win the Masters once again...but oh, how that must've dimmed when he spotted his lovely wife waiting for him! Too bad such a private moment had to be shared with the world...but what a wonderful private moment it was! And I'm sure more than I thought, "What better way to stop and smell the roses!" Life's blessings are the greatest prize of all.