Shallenberger State Nature Preserve and the “Knobs” of Lancaster,Ohio

This post is about Knobs.. Allen Knob.. Ruble Knob.. Becks Knob..with a short hike to the top of Allen Knob at Shallenberger State Nature Preserve. 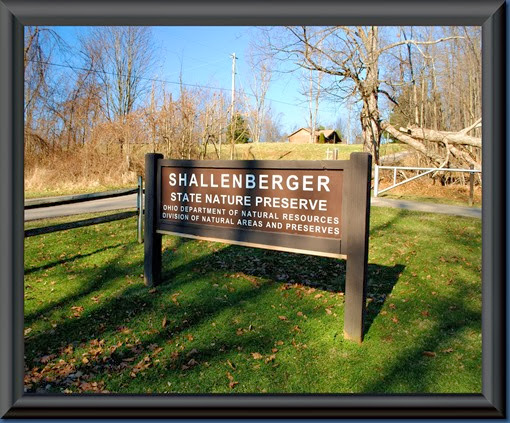 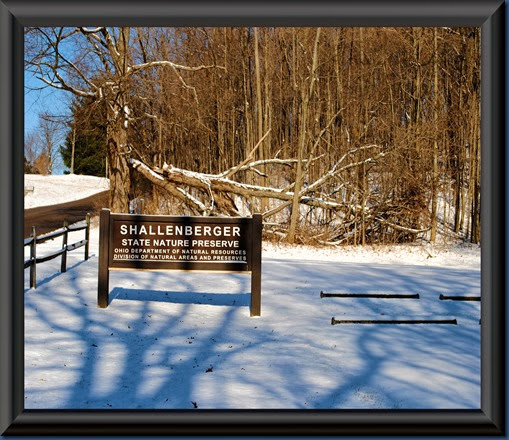 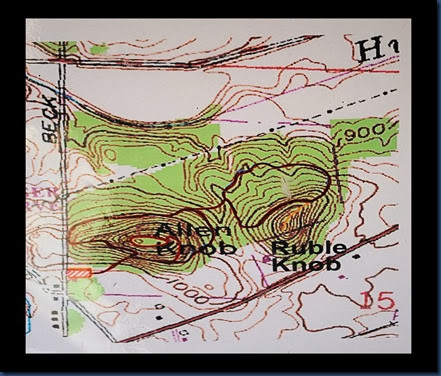 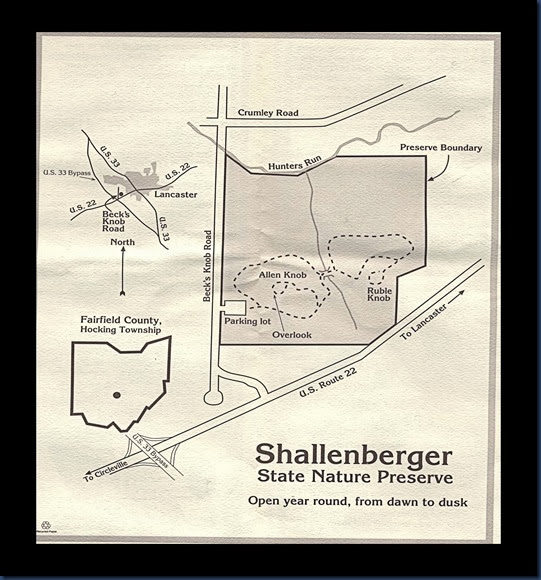 “More than 300 million years ago this portion of Ohio lay under the waters of a vast inland ocean. Large sand deltas were deposited by streams flowing into the ancient seas. Over millions of years, compaction of these sand deltas fused the sand into rock, creating the Black Hand sandstone formation found in Ohio today.” READ MORE 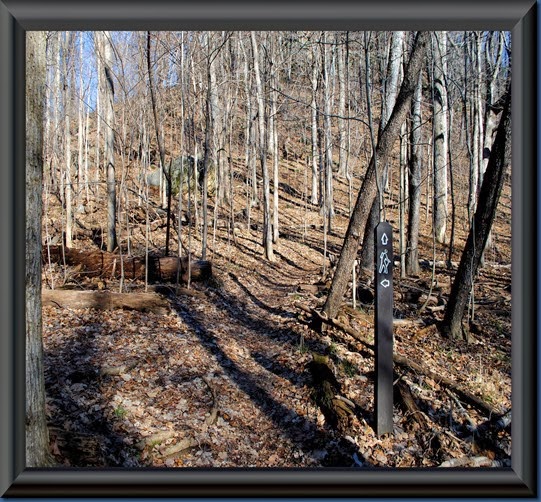 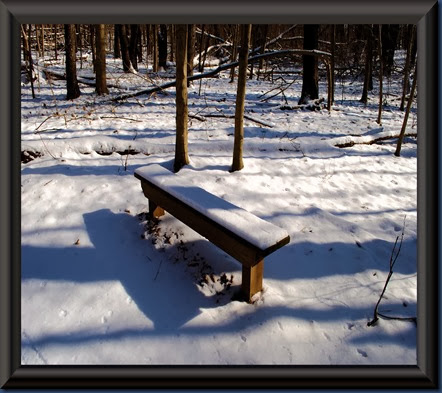 “At Shallenberger, the long process of weathering produced Allen Knob, a promontory of highly resistant sandstone, and the smaller adjacent Ruble Knob.” 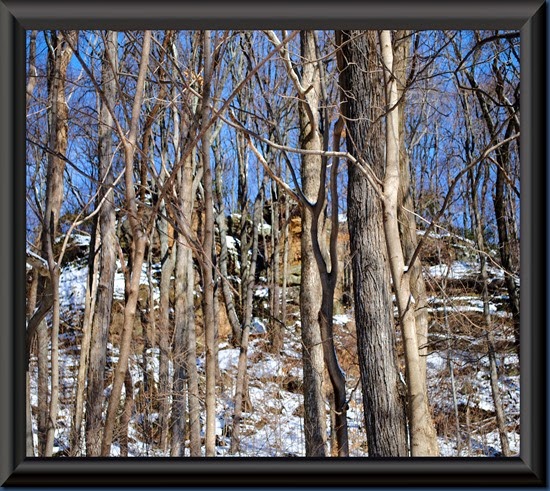 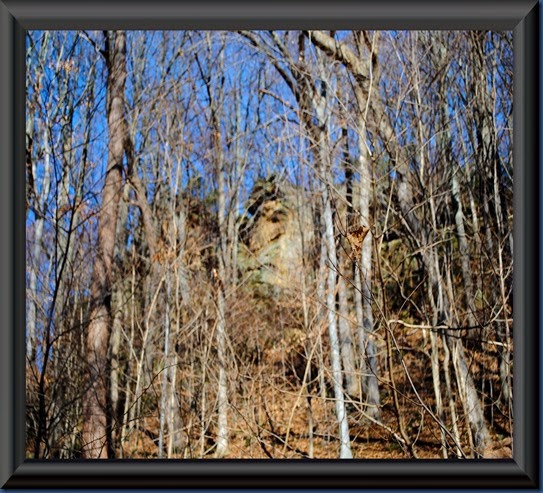 Looking up at Allen Knob from the lower trail. The snow makes it look a little different. These  flat-topped knobs southwest of Lancaster,Ohio mark the edge of the Appalachian Plateau and are what biologists call islands in the sky. 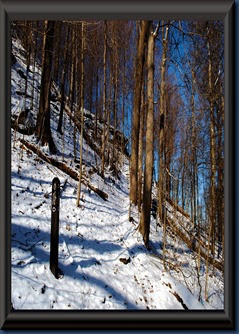 Straight ahead and up to Allen Knob or the trail to the right will take you to Ruble knob. The snow made it a little slippery. I found it a little more difficult coming down than going up. 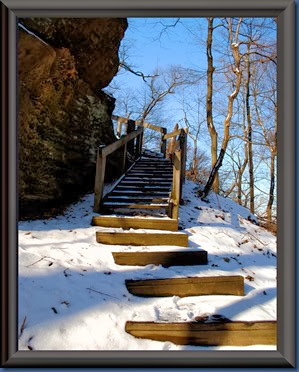 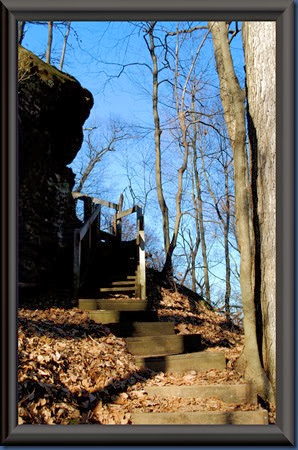 My walking stick came in handy.. We are almost to the top of Allen Knob. 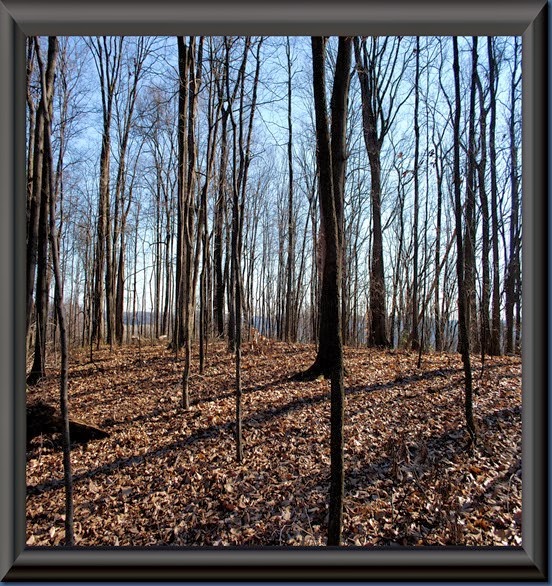 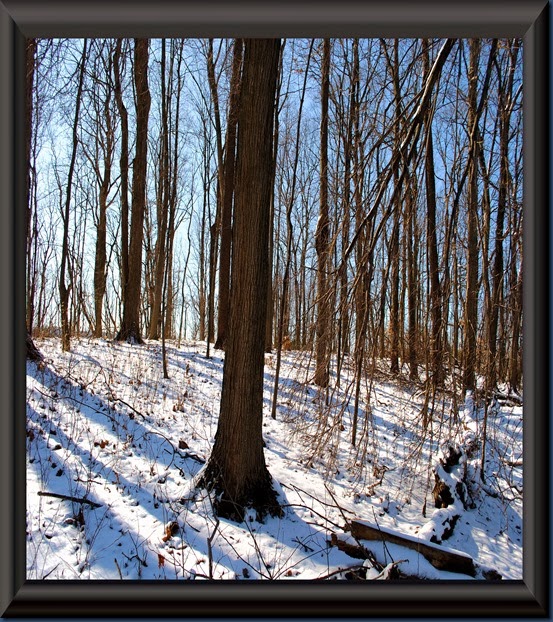 “At the top, the trees appear smaller, scraggly and poor because the soil is thin and dry. The dominant tree atop the knobs is the chestnut oak.” READ MORE

Next a view of Becks Knob (private property) as seen from the top of Allen Knob. 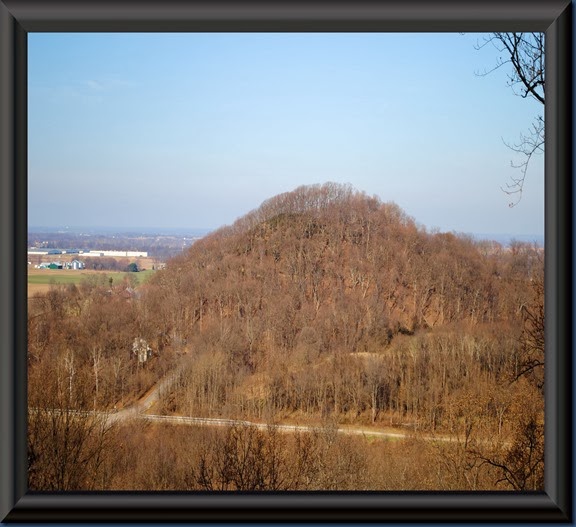 Just on the other side of Crumley Road you have Becks Knob with the city of Lancaster,Ohio in the far distance. 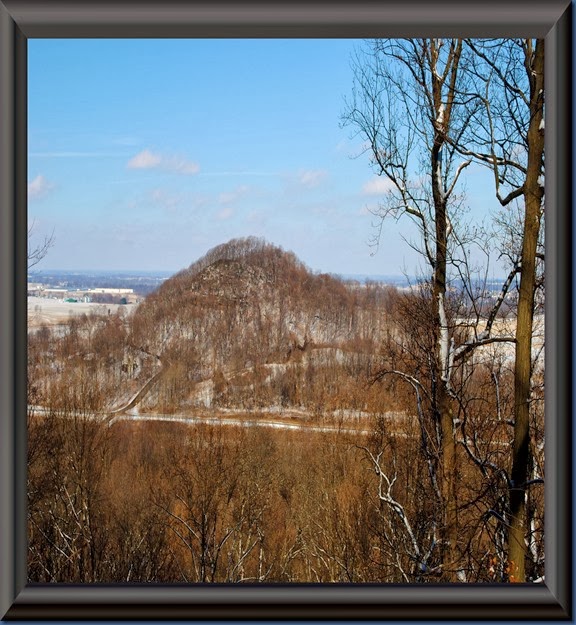 Found this on the net. I wonder if it is true..

“Beck's Knob is haunted by a man known as "Hermit on the Knob." He was an old man who lived on the hill who read his Bible every day and did little else. Perhaps out of boredom, he decided to end it all. He dug his own grave, then shot himself in the heart while standing above the hole with a note pinned to his chest asking that he be buried there. His ghost walks, carrying a lantern, from 22 to Beck Road toward the Hunter's Run Bridge, where it disappears.”

What I do know; there is an unusual depression in the ground on top of Allen Knob. 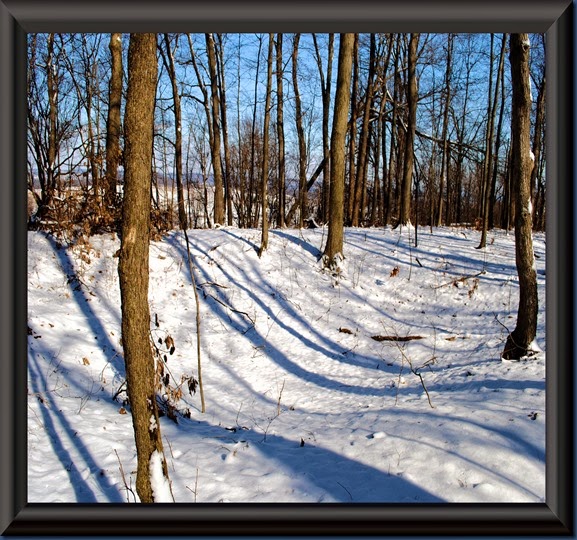 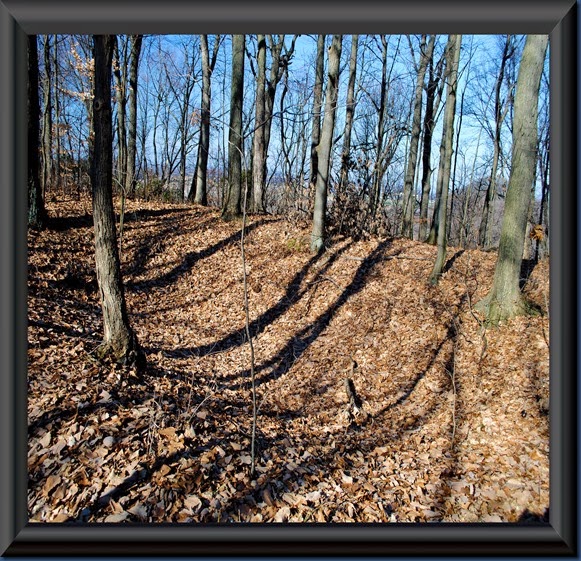 “The depression on top of Allen Knob was a small rock quarry that was in operation in the 1800s.”  Thank you Mr. Rick Gardner…. 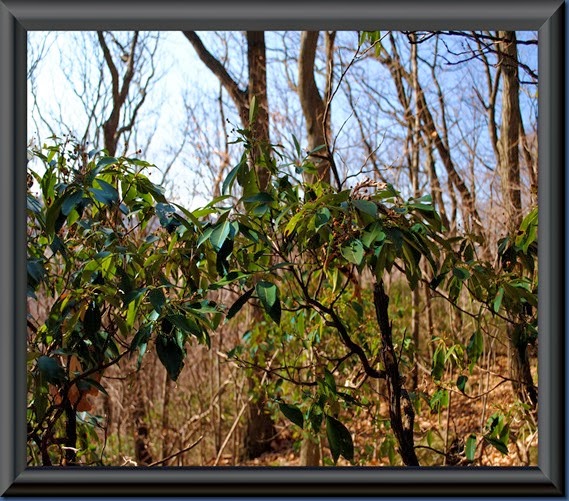 Mountain laurel also thrives atop the knobs, especially on their southern and western slopes. They are at their colorful best from late May to mid-July. (Another hike) 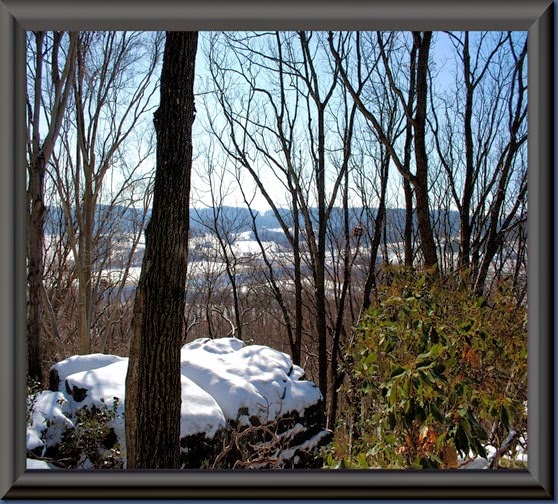 In the distance you have the U.S. 33 Bypass and U.S. Route 22….  Time to head back to Lancaster,Ohio and the Native American Pow Wow being held at the fairgrounds. 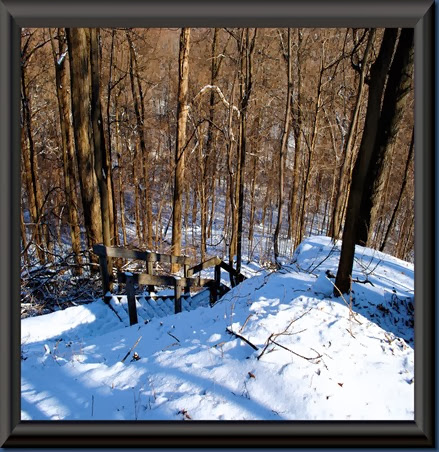 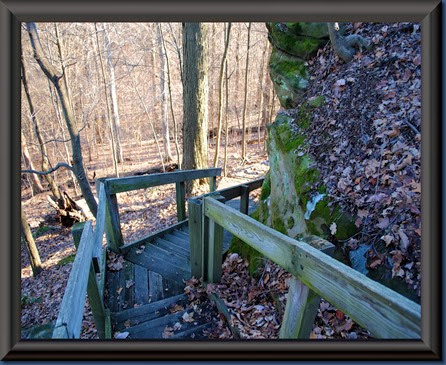 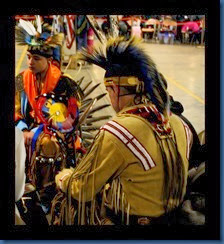 Joe Todd says, Learn to slow down, to be aware, to notice, and make every day an adventure.. Thanks for stopping by.

Thanks for Hob Knobbing at My Quality Time.

Lovely area!!! The caption on your banner photo made me laugh!!!

Nice walk and I like the story of the old man who lived on the hill.

What a gorgeous place to go hiking. All of that snow, the hills, knobs, and trees are so beautiful. I, too, always have more trouble going back down than going up. I wonder why that is. I rely like your little old man hobbling with his cane. That is such a cute graphic.

Great post and info on the Preserve. I enjoy walking in these parks and enjoying nature. Lovely photos, thanks for sharing.

Never been there Joe but it looks like a great place for a hike. I would have problems with those steps coming down too just because my legs are so short and they always seem to make them for long legs. LOL!
About that frozen outhouse on here... I have been there a many a time. LOL! Stay warm up there.

Beautiful nature area Joe -- and a good hike. Yeah, taking it slow is about the only way I can go nowadays. When I used to wear bifocals, coming down a steep hill was real tricky...partly the knees, partly the eyes, looking down was dicey. That's one thing that has improved with age (and cataract surgery)

Over here knobs means something else :)