John Muir (1838-1914) was America's most famous and influential naturalist and conservationist, and founder of the Sierra Club. This website, known as the "John Muir Exhibit" features his life and contributions. 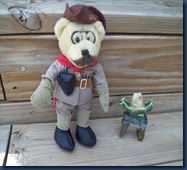 Have a great day

When they were both old, Emerson visited him, and Muir had looked forward to a good talk, but wrote that Emerson was in the hands of handlers who made his decision for him, apparently to keep him on schedule. Anyway, the visit was little more than a handshake, making me think that, perhaps, Emerson was getting a little senile.