“Keepers” In Memory of Paul Sewall for That’s My World

We had some storms yesterday evening in Lancaster,Ohio,lightning,thunder,and clouds. The back ground for the story Keepers is a photo of the clouds over my backyard. I wish I could claim the lightning but I can’t 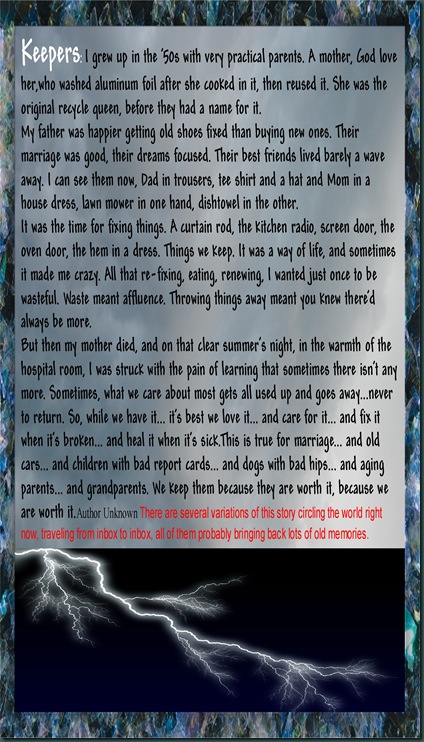 I did grow up in the 50’s but I don’t think my mom washed the aluminum foil. Both of my Grandmothers did. My one Grandma would unwrap her Christmas presents very carefully so all the wrapping paper could be reused. (took forever to a young boy).

Another Keeper was “Prison Paul”. LANCASTER: Paul James Sewall, 68, of Lancaster, passed away on Tuesday, July 13, 2010 at The Pickering House after a courageous battle with cancer. Paul volunteered at Fairfield Medical Center and Southeastern Correctional Institute Hence the nickname Prison Paul. Following Paul's wishes, his body has been donated to The Ohio State University to further medical studies.Paul was grateful for the life he had been given and grateful for learning that acceptance is the pathway to peace. When I was at Paul’s memorial service I talked with a young man Adam. He had been incarcerated at the S.E. Correctional Institute and had been out of prison for about a year. Adam is now enrolled at Ohio State University and has a 4.0 grade point average. Adam stated, “ If it weren't for Paul and the “meetings” he brought into the prison I would either be back in prison or dead. Paul’s memorial service ended with the Serenity Prayer: by the theologian Reinhold Niebuhr.

Goodbye Paul  a real “KEEPER” I will miss you. That’s My World in Lancaster,Ohio. Explore your world by clicking on the logo.

”For every ailment under the sun
There is a remedy, or there is none;
If there be one, try to find it;
If there be none, never mind it.”

A very moving post, Joe, and a very meaningful look at your world! Thank you for sharing this with us. Have a good week!

Excellent post, Joe.... I certainly know about 'keepers'... I have lost a mother, father and both of my brothers... All were 'keepers' ---and all did so much for me and for others... I miss them terribly.

So sorry about your friend, Paul... He definitely was also a "keeper".

Hi Joe...this is a wonderful post. The keepers story is touching and it did bring back memories. And I thought MY grandmother was the only on to re-use wrapping paper! Your friend Paul touched alot of people's lives.

Howdee..
very nice post. Its good to reuse and recycle..more important then ever now. These people knew it back then..of course money played a factor as well.

I also grew up recycling so many stuff. This is such a heartwarming post. Thanks for a glimpse at your world.