Joe Todd reporting from Lancaster,Ohio.. When the Grand Kids were here we climbed Mount Pleasant including “Devils Kitchen”, went on a trail ride at Spotted Horse Ranch,and then a canoe trip down the Hocking River. I’ll never be the same LOL….

Modern Lancaster is distinguished by a rich blend of 19th-century architecture (best evidenced in historic Square 13, part of Zane's original plot) and natural beauty (best evidenced by the famous Standing Stone, today known as Mount Pleasant) with all the typical modern accoutrements of a small-medium-sized American city. 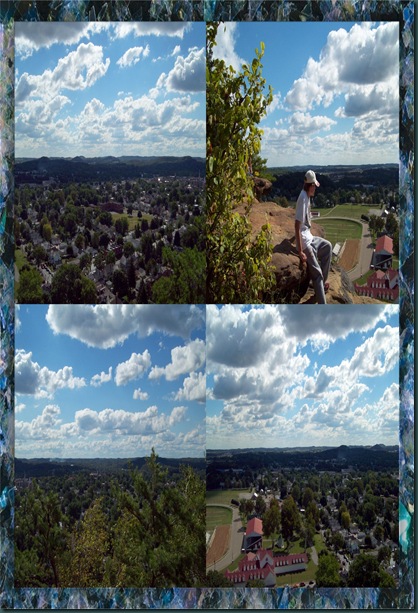 That is my Grandson Nate in the upper photo. From Wikipedia::” A famous Lancaster landmark is Mount Pleasant, a 250-foot (76 m) high sandstone bluff called "Standing Stone" by earlier Native American peoples. It is located in Rising Park, a large city park on the city's north side. It is possible to climb to the top of Mount Pleasant by following a short marked trail from the park through the woods that cover the bluff's other sides. There is also a cave known unofficially as "Devils Kitchen" in the front in which braver people are willing to climb about 20 feet (6.1 m) using only shallow "bear claws". Experienced rock climbers have climbed the sandstone face of the bluff many times as well. Once one has reached the top, there is a lookout area from which one can see over great distances, and take in not just a panoramic view of the nearby Fairfield County fairgrounds and much of the city of Lancaster, but the changing landscape of Central Ohio as well—from the relatively flat farmlands north of Lancaster to the wooded hills lying south of the city.” You can also get to DEVILS KITCHEN FROM the top down using a metal staircase. ( As a kid I went up those “bear claw” steps once. 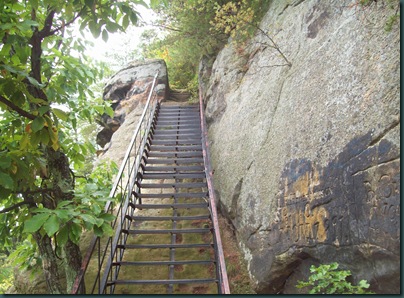 A sky shot from the “KITCHEN” taken on a different day 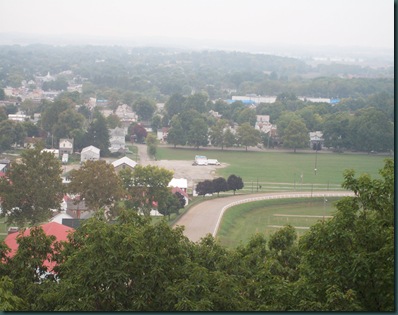 Thanks for stopping by and make sure to check out Skywatch Friday for some great skies from around the world.

Love all those puffy clouds and blue, blue skies! Terrific captures, Joe! Hope you have a wonderful weekend!

I like the stairs shot.
Sydney - City and Suburbs

Beautiful views from your part of the world. My favorite is last shot.

...something pretty special about being up where you can get a different, wider perspective...
Beautiful.

My husband may see some of the countryside near where you live. He plans to attend a mini motorcycle rally in Zanesville the last weekend of this month. One of the local motorcyclists will take attendees on a 200-mile circle tour of the area. I decided it would be too many miles for me to join him on the motorcycle, so I am staying home.