Trump heads to New Jersey golf club for working weekend… “Rather than causing a big disruption in N.Y.C., I will be working out of my home in Bedminster, N.J. this weekend. Also saves country money!”

An eighth-grader was fatally shot Monday near her school in Montgomery, Alabama, police said. The student, 14, was killed about 500 feet from Bellingrath Middle School. Police are searching for suspects who they believe were classmates of the slain girl, a police spokesperson said.

CHARLESTON, S.C. — A former South Carolina police officer who killed an unarmed black motorist in an encounter that was captured on video pleaded guilty in federal court on Tuesday.

It is hard to believe this is happening, but it’s real: The US Department of Justice is literally prosecuting a woman for laughing at now–Attorney General Jeff Sessions during his Senate confirmation hearing earlier this year.

The FBI has confirmed one of its translators travelled to Syria and secretly wed an Islamic State recruiter whom she had been investigating. 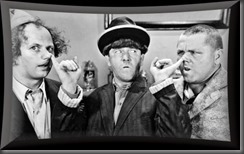