THE GATES OF HELL 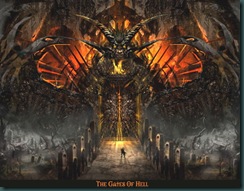 I found this poem while going through my Great Grandfather The Rev. Nathan Johnson’s papers.

I found it interesting and might be appropriate today.

A stranger stood at the Gates of hell
And the Devil himself answered the bell.
He looked him over from head to toe
And said: My friend, I'd like to know
What you have done in the line of sin
To entitle you to come within?

Then Franklin D, with his usual guile
Stepped forth with his toothy smile and said:

"When I took charge in '33
A nations faith was mine," said he
"I promised them this and I promised them that
And I calmed them down with a fireside chat.
I spent their money in fishing trips
And fished from the decks of their battleships.
I gave them jobs in the WPA
Then raised their taxes and took it away.
I raised their wages and closed their shops
I killed their pigs and buried their crops
I double-crossed both old and young
And still the folks my praises sung.
I brought back beer, and what do you think?
I taxed it so high they couldn't drink.
I furnished 'em money with Government loans
When they missed a payment I took their homes.
When I wanted to punish the folks, you know
I'd put my wife on the radio.
I paid them to let their farms lie still
And imported foodstuffs from Brazil.
I curtailed crops when I felt real mean
And shipped in crops from the Argentine.
When they started to worry, stew and fret
I got them to chant the alphabet
With the AAA and the NLB
The WPA and the CCC.
With these many units I got their goats
And still I crammed it down their throats.
My workers worked with the speed of snails
While the taxpayers chewed their fingernails.
When the organization needed dough
I closed their plants with the CIO.
I ruined jobs, I ruined health
And I put the screws on the rich man's wealth.
And some who couldn't stand the gaff
Would call on me and how I'd laugh.
When they got too strong on certain things
I'd pack and head for "Ole Warm Springs."
I ruined their country, their homes and then
I placed the blame on "Nine Old Men."

Now Franklin talked both long and loud
And the devil stood and his head he bowed.
At last he said: "Lets make it clear
You'll have to move, you can't stay here
For once you mingle with this mob, I'll have to find myself a job."

The author of this New Deal verse is unknown, but clearly he was a great American

Every once in awhile I have to throw something like this in… I would rather be hiking, golfing,or doing a little fishing… Thanks, Joe Todd

Belinda Augustus said...
This comment has been removed by the author.
3:03 PM

Wow! My children were home educated. When we got to the point in American History where we were disussing the Great Depression and FDR, many public resources praised the New Deal. I, on the other hand, spoke of the creation of the welfare state, and what I liked to call the Raw Deal. Guess it's all in one's perspective. Thanks for sharing, and Happy Easter.

It's a different view of FDR, certainly, though I doubt that many of us would be willing to throw all of his social programs out the window.

Snow appreciate your comment.. I read your post concerning "The Baptist" and "Church of Christ" My Great Grandfather was minister in "Church of Christ" I spent some time today going through some of his sermons etc. Will be able to use them in some future posts. Personally.as far as Govt. I think the pendulum swings to far in both directions with a lack of prudence.

This reminds me of the writings of my own grandfather. A man who abandoned his wife of 30 years for another woman and left her to survive on wellfare and whatever money their children could spare.