It is a wired world in Lancaster,Ohio and we do sometimes have neat skies and clouds. 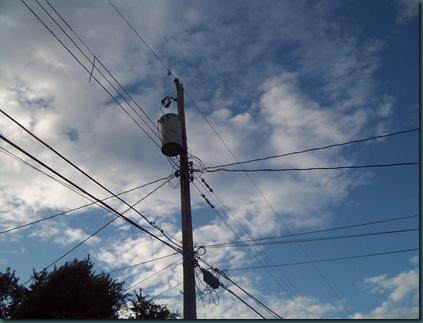 Or is it a weird world? Have you every had a cloud direct a spray of water at you then disappear? Tom D'Ercole 1975, in Oyster Bay, New York. 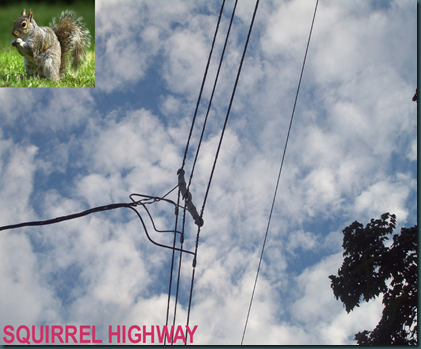 Sometimes a cumulus cloud will pass over a town and rain down dead insects.This happened in Hutchinson, Minnesota as reported in 1932 issue of Science. 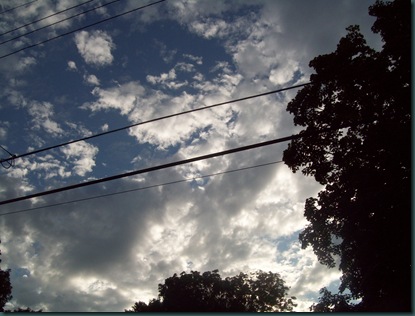 Same sky different perspective. Sometimes clouds will rain down seeds. This happened in Macerata, Italy 1897. The seeds came from a tree found only in central Africa and the Antilles. 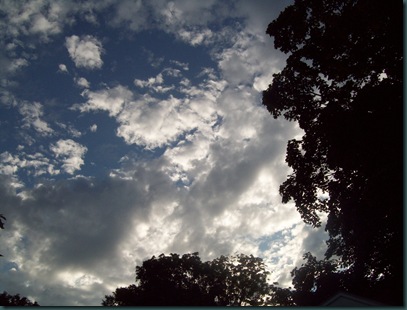 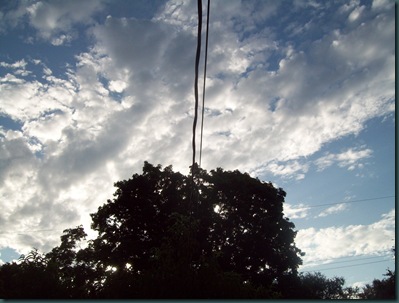 I wonder why they run a power line right thru a tree. Maybe to make it easier for the squirrels. (not really the case but it looks like it). It started in the 1940’s, cigar shaped clouds or cigar or saucer shapes in clouds. The aliens have arrived. 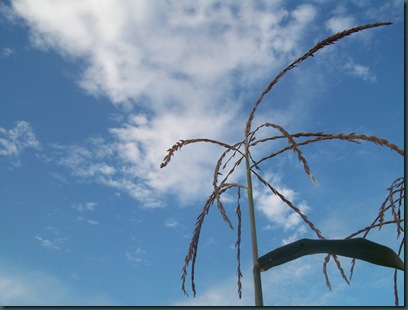 That’s what the sky looks like from the perspective of a corn tassel. Now I will tell you what is strange,all the above pictures were taken in my backyard in August in Ohio. We just don’t get clear blue skies like that with white puffy clouds in the middle of summer.

So I think I will go golfing 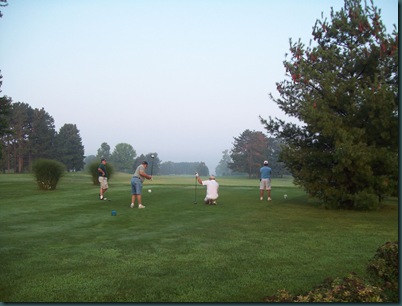 (click on above photo for Hilton Head golf video)

A more typical Ohio summer sky. For more great photos from all over the world check out SkyWatchFriday.

CLICK ON PICTURE TO GO TO FISHING GUYS BLOG.

Interesting sky views from your back yard. My neighborhood is WIRED too. Hope you enjoyed your golf game.
Hugs and blessings,

And thank you for your comment I'll take your words straight to my heart.

Have a great weekend!
Anna

Nice skies. If I saw those over my house in summer I'd be surprised too. Our skies are more like your last one...usually.

Fun collection of photos for sky watch friday, have heard stories about clouds doing odd things, no doubt if you were there to see it would have been an odd experience.

I enjoyed your post. The clouds look very pretty, we rarely see a cloud in the summer. When we do I notice it. Next time I will think of the different things that can come out of those clouds.

Yes, my neighborhood is wired, too, like so many! Great shots!

Hope the golf went well! Have a great weekend!

Joe - Really enjoyed the sky views from your yard - esp. the corn tassel! The facts about insects and seeds so interesting - hoping that doesn't happen here in CO.

Yes you surely do have spectacular skies. I try to avoid wires at all times, but sometimes the sky is so fine that the wires are worth the shot.
spirithelpers

LOL never heard of it raining dead bugs. Your shots are really good. I hardly ever can get a shot without have powerlines in the background. =)

Great shots. Thanks for visiting my blog.
Sydney - City and Suburbs

Unique set of cloud pictures! I like the story of the seeds raining down.

Did you take our Colorado sky to Ohio? I remember from growing up in Ohio that the skies were never blue! Loved the interesting facts about clouds. Still smiling.

I love those clouds! So many times I see such beautiful clouds but it seems the wires are always in the way! lol

Nice series of photos and beautiful skies...and you are right...we hardly ever get skies like this in Ohio...the golf shot is a usual Ohio sky...

Your post made me smile. We do live in a wired world and sometimes the weather does strange things.

It looks like confusion corner in the sky...nice shots.

Fascinating collection of happenings related to clouds. Mine are simple. Rain, hail, or snow. That's about it.
Beautiful shots. Does look like a good day for golf.

Joe: I am so happy that I live in a underground wired neighborhood. Those were some neat looks at your wired sky. I see the squirrels crossing the wires in other parts of the town and it is always fun.

BTW: Thanks for the ad, very special.

Interesting info about what might fall from clouds! Great shots from your back yard.

Some very nice Skies here, love the clouds and cotrast to the blue sky.

Have a nice SWF

Great pictures of the clouds. I love cloud pictures. My mom told me that it rained frogs a couple of times in the mid-west, where she comes from.

These clouds are lovely. I like the perspectives you tried out.

How was the golf?

I rather like those power lines in that first shot--like a human spider web in the sky!

Hey, Joe, I enjoyed the photos and stories. When I became a pilot in the '70s, old pilots would bemoan the fact that the sky is no longer as pretty and clear as it used to be. Here, one can sometimes climb a mountain and get above the yuck, but, sad to say, I can no longer climb mountains.

Great skies! We sure have had some nice ones this summer. I love the corn tassel shot! Thanks for visiting today.

HI!
What a great blog you have! Such a great post today for Sky Watch... Loved the insert of the squirrel!
wired and weird ;o) that was fun!
All the best, Maria

Thanks to everyone for stopping by.The golf was fun my back wasn't and the score showed it

Fabulous photos, much enjoyed. Scrolled down a bit & liked what I saw! Will return when I have more time! Thanks for your visit.

Joe, I'm so sorry about your back.

I really like the one with the sun glowing through the clouds... beautiful sky pictures

All excellent shots--wires and all. Great and quirky info, too. I love the fat puffy clouds. We have had more than usual too.

Thanks for visiting my blog. I had fun with Loo Lineup. MB

I wonder. do those clouds ever get tangled in all those overhead wires? Nice veriety.

I always try so hard to take photos without power lines. I really like this photo taken of them. Squirrel highway - that's cute!

The skies are beautiful, but those wires are too much. My husband is from Hawaii and in his town they don't have wires. I guess they put them all underground.

Great pics. I did enjoy the first one with all of the wires. Thanks for stopping by.